VJdada is a real time sound performance using the analysis of the frames of Hans Richter film Rhythmus 21.

When Richter filmed this mute work in 1921, he was mainly influenced by the theory of musical counterpoint and fugue. His idea was generating a visual rhythm using the inspiration of musical gestures.

Then, VJdada uses open source software for giving this film a soundtrack, not written by a composer but generated from the real time analysis of the shapes of the frames in an attempt to build an objective sound of Richter´s intentions.

I will present a non-interactive version of the film, as if it were a DVD. 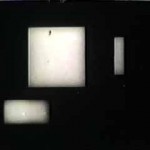