This exhibit and/or paper presents the after.video video book, discussing the topic of “Online and offline platforms for the exhibition and circulation of audiovisual media”. The after.video book represents a fusion of the modes of the digital/networked publication and the traditional form of the physical (wasted?) book. There have been first thoughts about the links and exchanges of the old traditional format of the book and the possible accordances of the digital book on a more practical level. The theoretical framing is given by thinkers of the book like Bob Stein: “the computer screen became a place for synchronous and asynchronous conversation. As web technology improved people started putting essays and books in a browser with a dynamic margin where readers could make comments visible to everyone. Over the past ten years the experience of dozens of 'social reading' platforms suggests that books will become places where people congregate to hash out thoughts and ideas.” (1). Practically this fusion of the possibilities and formats of new digital media (like video) and traditional academic text-form is also making headways – like exemplified in the 'Frames of Mind'-project (2). Open Humanities Press has taken these beginnings and fused different pre-existing trajectories of development as instantiated by above projects and conceptions, and fused them with the idea of rendering the digital book after.video as a physical device, much along the lines already taken in the landmark project “The Weise7 in/compatible Laboratorium Archive” (3). This conceptual leap represented by the dual-mode video-book enables the Centre for Digital Cultures (4) and Open Humanities Press (5) to not only go beyond the format offered by the first two volumes of Video Vortex (as put out by the Institute for Network Cultures (6), but also beyond the current state of digital publishing in media-rich, video-centric contexts, thus presenting a unique publication which reflects upon video theoretically, but attempts to fuse form and content in its own dual format. 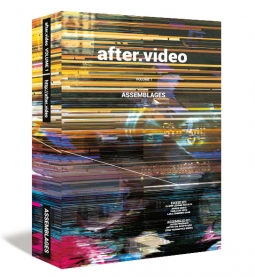